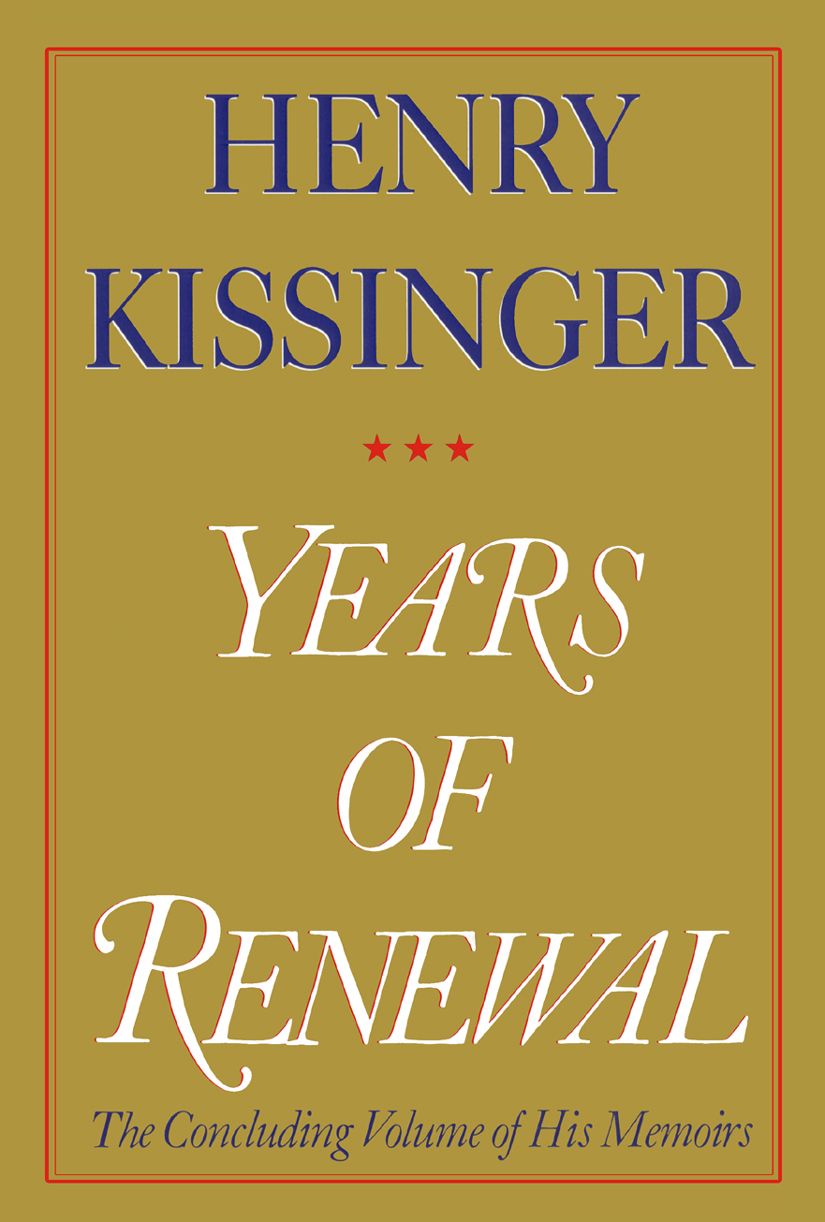 Perhaps the best-known American diplomatist of this century, Henry Kissinger is a major figure in world history, winner of the Nobel Peace Prize, and arguably one of the most brilliant minds ever placed at the service of American foreign policy, as well as one of the shrewdest, best-informed, and most articulate figures ever to occupy a position of power in Washington.

The eagerly awaited third and final volume of his memoirs completes a major work of contemporary history. It is at once an important historical document and a brilliantly told narrative of almost Shakespearean intensity, full of startling insights, unusual (and often unsparing) candor, and a sweeping sense of history. It begins with the resignation of Richard Nixon -- including Kissinger's final assessment of Nixon's tortured personality and the self-inflicted tragedy that ended his presidency and made Kissinger, for a time, the most powerful man in American government, as well as an intimate and definitive portrait of the man whom Kissinger knew perhaps more closely than anyone -- and then takes the reader through the years of Gerald Ford's administration, in which Kissinger continued to play a decisive role, both as Secretary of State and as the symbol of the continuity of American foreign policy. It shows us a moving and admiring picture of President Ford as a man of decency, shrewd judgment, courage, and decisiveness who led the country through a period of renewal.

Kissinger details the agony of the final U.S. extrication from Vietnam -- with the rise of an increasingly hostile Congress determined to micromanage American foreign policy and the evisceration of the American intelligence community and its consequences for American power -- and takes us inside the White House to show our leaders in a time of crisis.

Indeed, crisis is what this book abounds in: the fall of Cambodia and South Vietnam, the Mayaguez incident and the conflict between Greece and Turkey over Cyprus, the origins of the war in Lebanon -- above all the continuing crisis of the Cold War at its perilous height. Here are brilliant scenes, as only an insider could write them, of the shaping of American foreign policy in the Ford era: the famous shuttle diplomacy by which Kissinger brought a wary Yitzhak Rabin and Anwar Sadat together to begin the return of the Sinai to Egypt and usher in the final reconciliation of Egypt and Israel, the Vladivostok meeting with Leonid Brezhnev that advanced the process of nuclear limitation, the uneasy dialogue with China, the tragedy of the Kurds, the search for European security and freedom -- all the major decisions, conferences, and crises that shaped the world we live in, and that still, in many cases, remain major areas of engagement for the United States.

Kissinger recounts in detail his visits to Africa, which led to major initiatives in Southern Africa, including the historic decision of the white settler government of Rhodesia to accept majority rule, and tells the story of U.S. policy in the Americas, including revealing accounts of policies toward Cuba and Chile in the 1970s.

Above all, here are intimate, candid, and sharply intelligent portraits of world leaders, from Mao Zedong teasing Kissinger with a characterist mixture of brutality and acerbic subtlety, to Leonid Brezhnev, confused, unwell, desperately trying to conceal the Soviet Union's growing difficulties with a facade of blustering bravado, as well as a galaxy of European, Middle Eastern, Asian, Latin American, and African leaders.

Here is a work of scholarship, wisdom, and history, written not by desk-bound academic historian, but by the man who shaped much the history about which he writes, and who perhaps more than any other helped to form the post-Cold War world in which we live, and define America's relationship to the world as the last superpower.

No work of history about the Cold War or the inner workings of government and diplomacy is as revealing, thought-provoking, and far-reaching as this. Years of Renewal is the triumphant conclusion of a major achievement and a book that will stand the test of time as a historical document of the first rank. 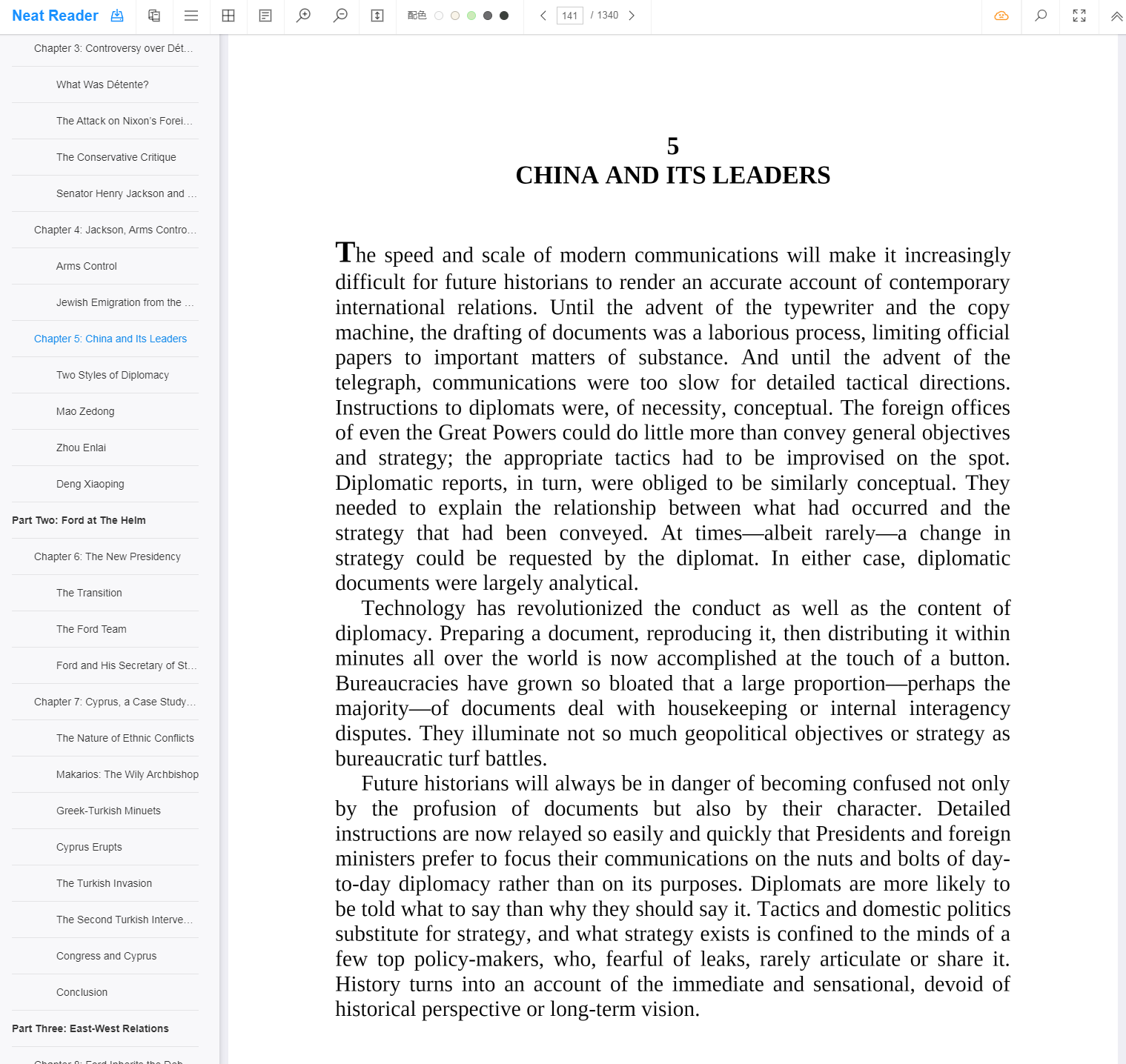